Whatever its price, oil is not getting “cheaper”

Despite their efforts to cut costs over the past few years, oil majors have to spend more and more to develop a barrel of oil equivalent – a trend that is unlikely to be reversed anytime soon.

The collapse of oil prices since 2014 has forced oil companies everywhere to slash spending on exploration, cut staff numbers, defer projects, and look for efficiencies across their operations. This has allowed them to successfully lower their breakeven price for oil projects, in particular in the U.S. ‘tight oil’ patch. The wellhead breakeven price for U.S. shale producers is now about half of what it was in 2010, according to data from Rystad Energy. 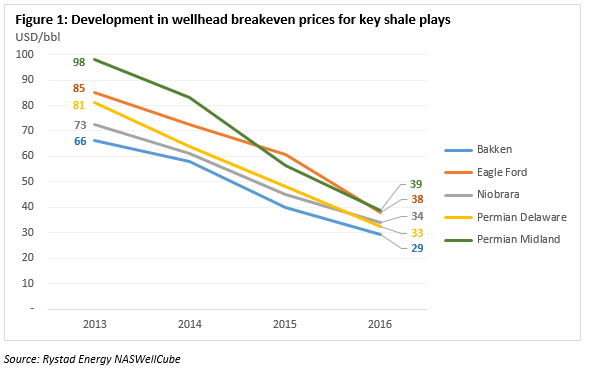 However, even if shale oil now accounts for over half total U.S. crude production, oil majors still produce most of their oil outside of the shale patch. And even if they have made some progress in cutting costs over the past few years, the decline of their breakeven prices has been nowhere near as sharp as for U.S. shale producers, as their costs have risen dramatically in recent years.

According to new research by UK based Oil & Gas Advisory company Apex Consulting Ltd., oil majors actually have to spend more to develop a barrel of oil equivalent (BOE) than before the price downturn – in fact, much more. Apex has put together a ‘Supermajors’ Cost Index‘, a proprietary index that measures the development cost efficiency of the ‘supermajors’ – ExxonMobil, Royal Dutch Shell, Chevron, Eni, Total and ConocoPhillips. Development cost is the most significant of the three major cost categories (exploration, development and operating costs) reported by the oil and gas companies, accounting for more than 55% of these costs on average between 2009 and 2015.  Apex’s Supermajors’ Cost Index suggests that development cost per BOE for ‘Supermajors’ as a group increased by a staggering 66% between 2011 and 2015.

Combined with the oil price crash of the last couple of years, the rising trend of oil development costs is putting increasing pressure on oil producers’ profitability. Oil majors were cash-flow negative in 2016, with falling profits and rising leverage. The financial situation of big U.S. oil companies, in particular, is deteriorating. According to the most recently released financial reports, the combined net income of the three largest U.S. oil companies (ExxonMobil, Chevron and ConocoPhillips) dropped from $80.4 billion in 2011 to $3.7 billion in 2016. When taking into account capital expenditures (CAPEX), their combined free cash flow fell from $46.3 billion in 2011 to a negative $8.7 billion in 2015 and a negative $7.3 billion in 2016.  The drop would have been even worse if the companies hadn’t slashed their CAPEX spending drastically. The combined CAPEX spending from the three oil companies fell 29% in 2016 versus 2015 and 46% since 2013, which is bad news for either building or even maintaining oil production in the future. The financial situation of the three oil giants is even more precarious when taking into account their large dividend payouts. Their combined free cash flow minus dividends has indeed been negative since 2013, and reached a negative $29 billion in 2016. Dividend payouts, however, do not come out of thin air, and when they cannot come from cash from operations they have to be debt-funded. The combined long-term debt of the three U.S. oil majors actually expanded from $40.8 billion in 2012 to $95.7 billion in 2016. Basically, these three companies combined long-term debt has doubled in just the past three years.

The rising cost of oil development is also weighing on oil producers’ breakeven prices. As oil prices remain volatile, oil majors are still trying to find their balance. Some are revising their breakeven prices down, such as Norway’s Statoil, which thinks it can get break-even for new projects down from $41 per barrel now to $27/bbl by 2022. BP on the contrary foresees a break-even price increase from $55/bbl now to $60/bbl by the end of 2017. Overall, major European oil companies need Brent prices of $50-60 a barrel for cash flow to break even in 2017, according to Fitch Ratings. Royal Dutch Shell, Total and BP should all be able to cover their CAPEX and cash dividends from operational cash flows if oil averages $50-60/bbl this year, Fitch says. If the recent oil price recovery proves to be short-lived and oil falls from the current level, however, these companies may continue to report negative organic free cash flows in 2017, and they may have to take additional cost reduction measures such as dividend cuts and further CAPEX reductions to maintain their credit quality. According to Fitch, U.S. majors now have a lower break-even than European ones due their more aggressive cost savings and efficiency gains. ConocoPhillips, for example, slashed CAPEX by around 70% and cut dividends by around 60% compared to the 2014 level. The three European majors have been less radical, cutting CAPEX by about 40% on average and providing scrip options to their shareholders rather than cutting cash dividends.

In recent months, oil companies have grown increasingly confident that the oil price rebound and their cost-cutting efforts are putting them in a safer position. Apex’s Supermajors’ Cost Index in fact declined by around 17% in 2015 from its 2014 peak, indicating that efforts by industry players to decrease their costs have had some impact in reducing the cost of their development activities. Oil companies expect further cost reductions in 2017 and beyond, but oil services suppliers and many industry observers on the other hand see costs going up as demand for services increases. A significant part of the cost savings achieved in recent years indeed came from the fall in suppliers’ rates, which are likely to rise again in the future as drilling activity picks up. There is in fact genuine concern among industry participants regarding the sustainability of cost reductions achieved in recent years. According to Apex Consulting, operators will eventually have to increase their investment activities (both in terms of developing assets and finding new reserves) in order to replace their depleting reserves. This will inevitably increase the demand for services, putting upward pressure on rates and consequently on costs.

Right now, price inflation has yet to kick in. But it could kick in faster than expected, especially where cost reductions have been the steepest and where production is already picking up, i.e. in the U.S. shale oil patch. Shale producers are indeed facing their first production cost increase in five years in 2017 as industry activity picks up and energy service providers hike fees to take a bigger share of the profits generated by higher oil prices. According to a recent CNBC report, the cost of drilling and fracking wells in America’s hottest oil fields is quickly rising. In fact, the drop in breakeven prices across North American shale plays is likely to have bottomed in 2016 and to give place to a steep rise, according to a recent analysis by Rystad Energy. Since 2013, the average wellhead breakeven price (BEP) for key shale plays has decreased from 8$0/bbl to $35/bbl, a decrease of over 55%. Part of this drop is attributable to structural changes, such as improved well performance and improved efficiency gains. But another set of drivers behind the falling BEP can be referred to as cyclical changes, which are driven by the industry cycle into which the oil industry entered in 2014, with a plummeting oil price. Among the key cyclical drivers for the shale wellhead BEP are highgrading (measuring the effect of operators focusing their drilling operations in the best acreages) as well as lower unit costs and production costs. These cyclical changes experienced since 2014 might however be partially reverted if and when the oil price recovers. According to Rystad Energy, the BEP might grow by 62% over the next couple of years for U.S. shale plays if all of the cyclical effects are reverted when the oil price starts recovering.

This perspective of a cyclical upturn hasn’t been missed on Wall Street, which is now throwing money at oil service firms. Overall, Wall Street is throwing the most money at U.S. energy companies since at least 2000 amid growing confidence that the industry is emerging from the worst downturn in a generation. After being beaten-down during the two-year price rout, oil service firms are grabbing a rising share of this money.  Oilfield servicers that provide the rigs, fracking equipment and sand used by drillers made up 22% of the equity totals in January, compared with 5% all last year.

Even if energy investments look attractive to Wall Street right now, the oil industry is increasingly stuck between a rock and hard place. Producers are trying hard to cut back on spending in order to fix their finances and pay down the massive pile of debt that they have accumulated in the past few years, but their present and future profitability is and will keep being threatened either by decreasing prices or by increasing production costs – or a combination of the two.

None of this will come as a surprise to biophysical economists, who have long argued that the energy cost of global oil production has been on a rising trend for decades, and that this would inevitably translate over time into rising monetary production costs.

Estimates of Energy Return on Investment (EROI) values and trends for global publicly traded oil and gas show a decline of nearly 50% in the decade leading to the 2008 financial crisis (Source: Hall et al 2013, based on data from Gagnon et al 2009).

New research by a team of Italian scientists into the competing dynamics of oil price, economic growth and extraction costs, published on Cornell University’s Arxiv website in October 2016, suggests that the declining trend of the EROI of oil is accelerating. The EROI of global oil, they say, has likely halved in the short course of the first 15 years of the 21st century.

While investors, governments and the media are increasingly fixated the market price of oil and have been touting “the return of cheap oil” for the last couple of years, the cost for the world of procuring its supply of oil continues to rise – both in energy terms and in monetary terms. Whatever its market price fluctuations may be, the “lifeblood of the global economy” is not getting cheaper to procure, it is getting increasingly costly.