Is the ‘unstoppable force’ of electric car growth on a collision course with the ‘unmovable object’ of resource constraints?

The rapid rise of electric car sales is widely celebrated these days. According to some , it could kill the growth of fossil fuel demand in a matter of years, cause another oil price crash, and bankrupt most of the oil industry. These predictions are probably overstated, however, even if the growth of electric car sales meets current expectations. The Paris climate deal aims to have 100 million electric cars on the road by 2030, or roughly 6.6% of the expected car fleet in the world by then. Such target equates to a 100-fold increase in the global stock of electric vehicles.

The rapid growth of electric car sales worldwide could however run in the not too distant future into some constraints that are often overlooked. A first constraint is the availability of additional power generation capacity to meet the rising demand for electricity resulting from the growth of the electric vehicles fleet – and the risk to actually increase GHG emissions from road transport if this additional electricity cannot be generated by renewables. A second constraint is the availability of the numerous materials that are needed to manufacture electric vehicles and their batteries.

Much of the discussion surrounding possible material constraints to the spread of electric cars has so far been focused on lithium, the essential component of lithium-ion batteries used in electric vehicles. It is generally assumed that there is ‘sufficient’ lithium available to fuel the growth of the electric car market, even if the reserve and resource estimates vary greatly between different studies. However, it is not simply the quantity of a resource that is relevant to ensure the success of a technological transition. The time dimension matters too, as annual production rates have to be able to grow in sync with the rising demand. Heavily concentrated material supply chains such as that of lithium have been disrupted in various ways in the past, and research shows that the flow rate into society may be a more difficult constraint than resource availability, a constraint that is seldom adequately addressed (Kushnir et al, 2012, Vikström et al, 2013). Complacency is therefore not an appropriate stance for a robust evaluation of material risks in the case of lithium, the availability of which could in fact become a problem for meeting demand in the coming years.

Beyond lithium, however, the growth of the electric car market is also putting increasing pressure on a number of other key resources. The availability of cobalt, in particular, is becoming a cause for concern for electric carmakers. Cobalt, which is mined almost exclusively in the Democratic Republic of Congo, is used to improve the stability and capacity of batteries for electric vehicles.

The Financial Times recently reported that cobalt has suddenly become scarcer after a group of a dozen hedge funds purchased and stored an estimated 6,000 tonnes of the metal, worth as much as $280m, and equivalent to 17% of last year’s global production. These funds, obviously, are betting that demand for cobalt, half of which comes from the electric vehicle industry, is destined to soar, and that price will spike. According to commodity consultancy CRU, global demand for cobalt is expected to outstrip supply in 2017 by 900 tons, and to grow by 20% in each of the next five years. The price of cobalt, has jumped more than 50% since November 2016 to $23 a pound and could rise further. Prices rose to peak at about $50 a pound in 2007, before dropping to a low of $10 in 2015. 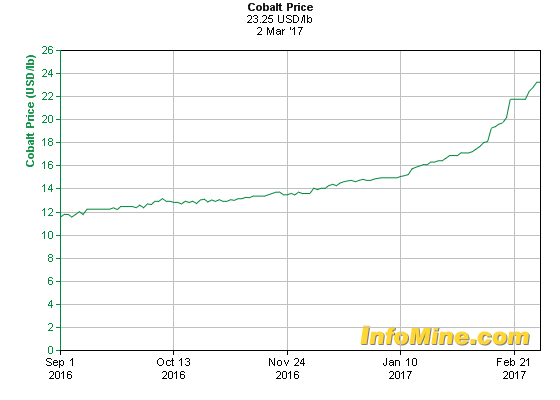 As hedge funds start stockpiling cobalt, the availability of this already scarce metal suddenly becomes more constrained, making it harder to obtain for the companies that use it to boost the power of lithium-ion batteries. This is bad news for electric carmakers, who are in the process of developing new models for an expanding market, and for the companies that provide them with batteries, such as Johnson Controls or Japan’s Panasonic.

According to energy analyst Luís de Sousa, this latest development in the cobalt market has “all the ingredients of a full blown resource scarcity crisis: relentless price hikes, hoarding investors and threatened industries.” A resource scarcity story like this was inevitable, he says, and similar episodes are certain to repeat with other metals too, lithium being a prime candidate. Last November analysts at Credit Suisse warned that, given the rapid rise in battery demand, shortages should be expected in the supply for lithium, graphite and cobalt. The price of lithium has already risen dramatically over the past couple of years. Governments, according to de Sousa, “have understood the importance of maintaining strategic reserves of petroleum and gold, but are yet to create mechanisms to deal with scarcity of most other resources.“

In an article published last year in BioPhysical Economics and Resource Quality (BERQ), Ugo Bardi, Rolf Jakobi and Hiroshan Hettiarachchi argued that the depletion of mineral resources could usher in an ‘age of stockpiling’. The gradual depletion of low cost (or “high grade”) mineral ores is in fact generating increasing extractive costs and diminishing economic returns. The market reacts to this situation either with high prices, which depress demand, or with very low prices that reduce or eliminate profits for the extractive industry, which is forced to reduce production. As a consequence, it is becoming increasingly difficult to manage the remaining mineral resources in such a way to ensure a sufficient supply for the economy and to avoid price shocks originated by the vagaries of the market or by social or strategic conflicts. This is particularly important for critical and rare metals, such as those needed by the electronic industry and for vital tasks such as the conversion and the transmission of electrical energy produced by renewable (e.g. photovoltaic) plants – or for the construction of electric vehicles. One possible reaction to these problems is stockpiling, that is keeping mineral resources stored above ground and readily available in order to provide a buffer against price and supply shocks. There are several ways in which this could be done, such as establishing a “metal bank” that could be used to manage the supply of rare and sensitive minerals.

The recent purchase and storage of massive amounts of cobalt by hedge funds shows that, if governments have yet to acknowledge the growing threat of mineral resource depletion, private investors on the other hand might be getting ready for the ‘age of stockpiling’.